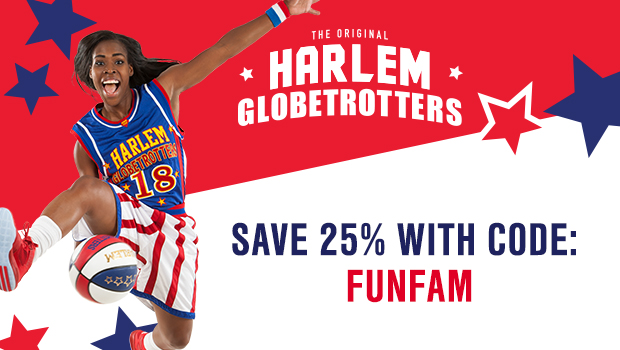 Nothing makes a family more happy than experiencing a venue together.  I took my kids out to see the Harlem Globetrotters.  My boys had a great time.  There were lots of jokes and folly. It was a show that got the audience fully involved.  They threw out gifts to the crowd and allowed random children to be involved in the show. There were times when the Globetrotters played pranks on the audience.  No one was excluded from being part of the show.

Although, there were loads of practical jokes, there was also a full basketball game as well.  The Globetrotters played against another team who attempted to cheat.  Naturally cheaters never win so we watched the Globetrotters kick their butt.  That was a great lesson for my kids.  My 14 year old and 10 year old really were amazed at the other teams sneaky antics.

The Globetrotters were so engaged with the audience that they even signed autographs for the crowd.  I was totally amazed!  When I went home after the show I took a picture and posted it on instagram with the hashtag #harlemglobetrotters.  To my surprise they even liked my picture, what an amazing team.  You definitely have to check out their show.

Leave a Comment
submit a review Join our blog team